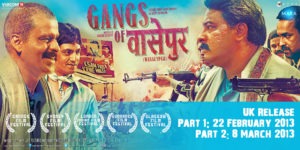 Gangs of Wasseypur – Part 1 (stylized as Gangs of वासेपुर) is an Indian crime film co-written, produced and directed by Anurag Kashyap.[8] It centers around power struggles, politics and vengeance between three crime families. Part one features an ensemble cast with Manoj Bajpai, Richa Chadda, Tigmanshu Dhulia in the major roles and its story spans from the early 1940s to mid 1990s.
The sequels were originally shot as a single film measuring a total of 318 minutes and screened at the 2012 Cannes Directors’ Fortnight[9][10][11][12] but since no Indian theatre would volunteer to screen a five plus hour movie, it was divided into two parts (159 mins and 158 mins respectively) for the Indian Market.
The film received an A certification from the Indian Censor Board but is still unusually explicit for Indian standards as it contained authentic lingo and violence generally suppressed by mainstream Indian cinema.[13] The films soundtrack is heavily influenced by traditional Indian folk songs.
Part one was released on June 22, 2012 in more than 1000 theatre screens across India. It was released on July 25 in France and on June 28 in the Middle East but was banned in Kuwait and Qatar.[14][15] ‘Gangs of Wasseypur’ will be screened at the Sundance Film Festival in January 2013.[16][17] Gangs of Wasseypur has bagged four nominations, including best film and best director, at the 55th Asia-Pacific Film Festival.